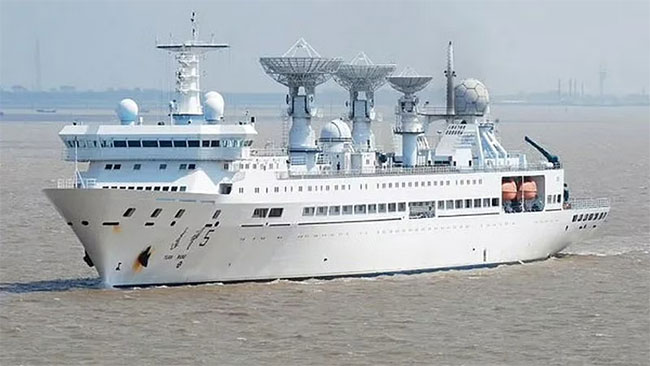 Defense and security agency sources said the Indian Navy is monitoring the movement of a Chinese research vessel sailing to Hambantota port in Sri Lanka.

However, the exact purpose of the vessel’s visit to Hambantota is unclear.

The Chinese research vessel — called the Yuan Wang 5 — is reportedly involved in space and satellite tracking. After first denying reports of its expected arrival at Hambantota port, Sri Lanka’s defence ministry confirmed Saturday that the vessel would be docking at the port between 11 and 17 August.

This came after Arindam Bagchi, spokesperson of India’s external affairs ministry, alluded to the Chinese vessel while telling the media Thursday that India “carefully monitors any development having a bearing on its security and economic interests”.

Consequently, Reuters reported that China Friday said that it hoped “relevant parties” would refrain from interfering with its “legitimate maritime activities”. According to the report, the “Yuan Wang 5 is one of China’s latest generation space-tracking ships, used to monitor satellite, rocket and intercontinental ballistic missile launches”. The Yuan Wang 5 is a third-generation vessel in the Yuan Wang class series and entered service in 2007. It has a displacement of 25,000 tonnes and can hold out against a maximum wind scale of 12. The Yuan Wang 5 was built by the state-owned Jiangnan Shipyard in Shanghai. It reportedly also has an aerial reach of 750 km. The Yuan Wang 5s are operated by the Strategic Support Force of the People’s Liberation Army (PLA).

The Ukrainian hero and his wife die in a powerful attack in ...

SLFP, SJB and TNA on board with talks for all-party govt: PMD