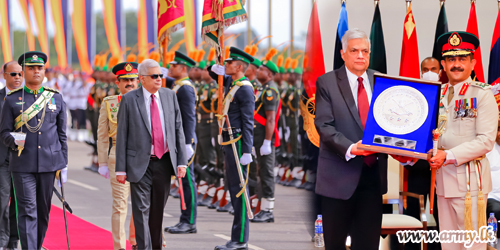 President Ranil Wickremesinghe visited the Sri Lanka Army’s headquarters in Colombo on Tuesday (August 9) and expressed his gratitude to the army personnel protecting the parliament during the recent violence. The army also presented a guard of honor to the president.

The Army Headquarters at Sri Jayawardenepura on Tuesday (9) laid a red carpet welcome to the Commander-in-Chief of the Armed Forces, President Ranil Wickremesinghe when he made his first formal visit to the HQ at the invitation of the Commander of the Army, Lieutenant General Vikum Liyanage after the former’s recent assumption of office as the 8th Executive President of Sri Lanka.

Attaching more importance to the day’s itinerary, the President in an appreciative move did not forget to meet a representative gathering of Army troops who performed their duties on that fateful day a few weeks ago when a violent mob tried hard to take control of the Parliamentary complex which is considered as the pinnacle of the Democracy and Sovereignty of Sri Lanka. Army soldiers on duty while trying to prevent their entry sustained injuries and some of them had to be admitted to hospitals for urgent treatment. 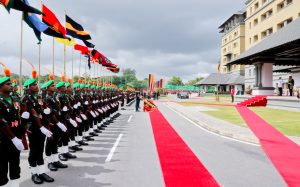